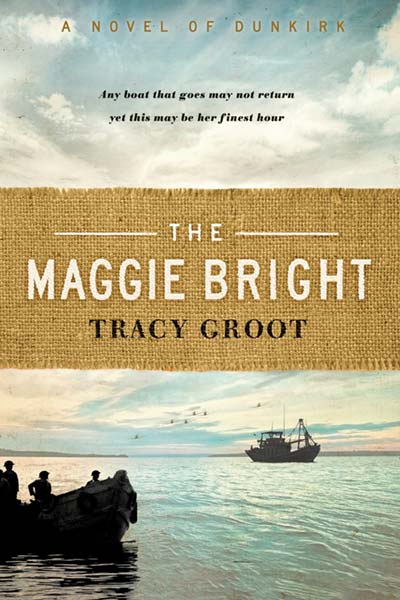 In May of 1940, Britain and France made stand against Hitler and his oncoming forces–and utterly collapsed under Hitler’s crushing blitzkrieg.

Cut off and surrounded, the British army faced complete annihilation on France’s northern coast, at the small resort town of Dunkirk. Churchill and the British admiralty fought desperately to rescue the men with Royal Navy destroyers–but many of the vessels could not come in close enough to the beach–the shore was too shallow. The situation was catastrophic enough for Churchill to speculate that only 45,000 men at most stood a chance to be rescued.

King George called for a day of prayer for the British Army on May 26–over the next several days, events transpired which Churchill would later call a “miracle”: under heavy enemy fire, the British people came to the rescue of its army, saving not 45,000 men…but 360,000.

Maggie Bright tells the story of a civilian boat destined to play a part in the biggest military rescue in history.

ISBN: 1-4143-5948-9 | Pages: 368 | Hardcover | Reviews | Q&ANear the end of the Civil War, inhumane conditions at Andersonville Prison caused the deaths of 13,000 Union soldiers in only fourteen months. In this gripping and affecting novel, three young Confederates and an entire town come face-to-face with the prison’s atrocities and learn the cost of compassion, when withheld and when given.

Sentry Dance Pickett has watched, helpless, for months as conditions in the camp worsen by the day. He knows any mercy will be seen as treason. Southern belle Violet Stiles cannot believe the good folk of Americus would knowingly condone such barbarism, despite the losses they’ve suffered. When her goodwill campaign stirs up accusations of Union sympathies and endangers her family, however, she realizes she must tread carefully. Confederate corporal Emery Jones didn’t expect to find camaraderie with the Union prisoner he escorted to Andersonville. But the soldier’s wit and integrity strike a chord in Emery. How could this man be an enemy? Emery vows that their unlikely friendship will survive the war—little knowing what that promise will cost him. Emery leads Dance and Violet to a daring act that could hang them for treason.

☞ Click here to support a Local Independent Bookstore where you can purchase The Sentinels of Andersonville.
☞ Purchase at Christianbooks.com, BarnesandNoble.com, Amazon.com, Lifeway.com or FamilyChristian.com. Years of Nazi occupation have stolen much from Brigitte Durand. Family. Freedom. Hope for a future, especially for a woman with a past like hers. But that changes the day American fighter pilot Tom Jaeger is shot down over occupied France. Picked up by the Resistance, Tom becomes the linchpin in their plan to infiltrate a Germans-only brothel and get critical intel out through Brigitte, a prostitute rumored to be sympathetic to the Allied cause.

D-day looms and everyone knows that invasion is imminent. But so is treachery, and the life of one American pilot unexpectedly jeopardizes everything. He becomes more important than the mission to a man who cannot bear to lose another agent and to a woman who is more than just a prostitute, who finally realizes that her actions could change the course of history.

☞ Click here to support a Local Independent Bookstore where you can purchase Flame of Resistance.
☞ Purchase at Christianbooks.com, BarnesandNoble.com, Amazon.com, Lifeway.com or FamilyChristian.com.

Tallis, a philosopher’s servant, is sent to a Greek academy in Palestine only to discover that it has silently, ominously, disappeared. No one will tell him what happened, but he learns what has become of four of its scholars. One was murdered. One committed suicide. One worships in the temple of Dionysus. And one & one is a madman.

From the author of The Brother’s Keeper comes a tale of mystery, horror, and hope in the midst of unimaginable darkness, the story behind the Geresene demoniac of the gospels of Mark and Luke.

☞ Click here to support a Local Independent Bookstore where you can purchase Madman.
☞ Purchase at Christianbooks.com, BarnesandNoble.com, Amazon.com or FamilyChristian.com. Stones Of My Accusers

ISBN: 1-4964-2218-X | Pages: 416 | Reviews  “A captivating stand-alone sequel to The Brother’s Keeper, Stones of my Accusers reveals the transforming difference Christ’s mercy makes through the lives of several compelling characters.”

Joab and Jorah are each traveling separately to find a prostitute named Rivkah and inform her of her son Nathanael’s death. Joab has been commissioned to take Nathanael’s words to Rivkah (“Tell her, No stones.”). Jorah, a sister of Jesus, secretly plans to get revenge on Rivkah.

Through the story of the stones and the sacrifice of a Roman official, each character’s life is forever impacted by the amazing mercy of God.

☞ Click here to support a Local Independent Bookstore where you can purchase Stone of My Accusers.
☞ Purchase at Christianbooks.com, BarnesandNoble.com, Amazon.com, Lifeway.com or FamilyChristian.com.

His name is James. He was the brother of Jesus Christ. The Brother’s Keeper is a story imagined from the few known facts of the life of a real man. The book tells the story of the latter part of Jesus’ ministry, up through his death and resurrection, as seen through the eyes of His own family. Tracy Groot takes readers, with James, on a journey from unbelief to belief as James grapples with the question of who Jesus is.

☞ Click here to support a Local Independent Bookstore where you can purchase The Brothers Keeper.
☞ Purchase at Christianbooks.com, BarnesandNoble.com, Amazon.com, Lifeway.com or FamilyChristian.com.